You Wanna Get High? Part 2

One of my favorite TV shows, on the Smithsonian Channel, is called Aerial America. It's absolutely fascinating to see the different states "from above."  Thankfully, the Colorado episode is on Youtube, so I wanted to share it.

They fly over Aspen at about the 5 minute mark.

When I see the paragliders – in both the video and looking up at the mountain in the mornings – it reminds me of my brief attempt at hang gliding many, many, many years ago. I lived in Chattanooga, Tennessee at the time, and at the time Chattanooga had one of the top hang gliding schools in the country. It was different from a lot of the other training schools because most of those were at a beach, which was an entirely different experience. You see, at the beach the direction of the wind was consistent and the "lift" predictable. The wind would come from the ocean, hit the cliff and lift the kite or glider in the air so you could soar along the ridge. It's pretty much what Orville and Wilber did at Kitty Hawk.

But to fly in the mountains is completely different. There were "rotors" that could create wind turbulence and draft from a variety of places and locations. As the saying goes, "If you could make it there, you'd make it anywhere."

The first day in class, they took us up on a 60 foot hill with a gradual slope and fastened us into our hang glider. (Btw, a hang glider is very different from a parasail, but I digress).  The goal was to fly down the hill but only get up in the air about 10 feet or so. It's a great way to learn without risk. Or so they say. 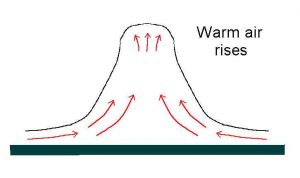 Me? I "caught a thermal" my first flight. Catching a thermal means that you find yourself in a swift updraft of the air.  For me, that meant I instantly rose to 60 feet in the air!  That's 6 stories! The thermal focused on my left wing, pushing me and my glider to the right. My instructor was freaking out and yelled as loud as he could, "Turn left!!!"  I did and rode out the thermal safely to the ground, even landing on my feet. I was called "Thermal Queen" from then on.

What's the moral of the story? I guess two lessons can be gathererd. One is that sometimes life can take you "up" before you're ready. And two is that I'm so glad I did this when I was younger. I'm not so sure my body would be able to take it now.

Here are a couple of songs about flying. Enjoy!