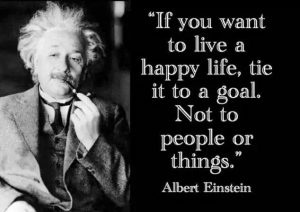 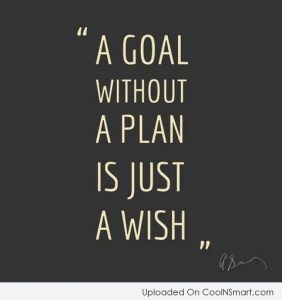 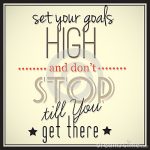 When I told a friend about my move, she asked me, "What's your goal, Brownell?"

My reply was "It's my goal not to have a goal."

W-w-w-what? Most people would ask. As the quotes to the right suggest, goals are crucial! Necessary! The only way to live!

Not so, says I. As smart as Einstein was, I can't agree with this quote to the left. At least not for me, not for now. Not anymore. And sorry, Albert, but I think experiences, whether they're people or things, are the components of a happy life.

I'm not saying we should live an aimless life. It helps to entertain a vision, if not a destination. But if you're like me, it hasn't worked out that way. More like John Lennon's suggesting, "Life is what happens to you while you're busy making other plans."

Most – if not all – my goals and plans haven't worked out. In fact, I've become somewhat of an expert in "failure." Here's my talk at an event earlier this year:

So now to be able to reply, "It's my goal not to have a goal" is an incredibly freeing statement for me. It doesn't mean I'm going to stop doing things, to stop putting myself out there, to stop trying. It just means that I've released all attachment to the outcome.

Here's a case in point: Yesterday I the first draft of a new screenplay I've written. To say I'm proud of it would be an understatement. That doesn't mean it's perfect, because I'm sure there are errors a more seasoned screenwriter would probably not make. But I do think it's exceptional. Very different, very powerful, and, yes, in true "Brownell" fashion, life-changing, if not world-changing.

What's my goal with this script, you ask?

I fear that as soon as I attach a goal to it, the magic dissolves. That attachment itself is the dissolving agent.

The following Aerosmith song got me through a lot of dark times.  First, read the lyrics below. Even the oft-used "Life's a Journey, Not a Destination" quote is poignant in this context.