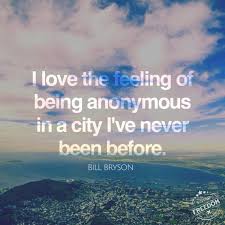 The interesting thing about coming to a new town and starting over is that you're a nobody. Completely anonymous. You don't know anyone, and they don't know you. You can walk down the street and never get a second glance.

I remember when I lived in Manhattan I'd never felt so alone in a crowd in my life. It was the summer between my junior and senior year of college. I was working for an advertising agency and for the first two weeks I was filling in for the Chairman's assistant while she – and he – were gone. So I was alone. Alone alone. If that wasn't depressing enough, the first week I was there (living in a studio apartment on the upper west side), I dropped my clock radio and guess what broke? No, not the clock. And not the whole radio. Just the FM part was gone, so I was left with AM radio as my only entertainment. Talk about torture! The same three songs playing over and over again all summer long! And of course this was before the days of social media – or even cell phones, so I was completely isolated. I remember walking home one day and crying my eyes out. No one even gave me a second glance.

So here I am again – alone and starting over in a new city. 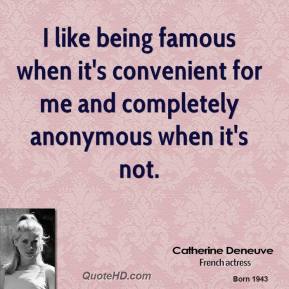 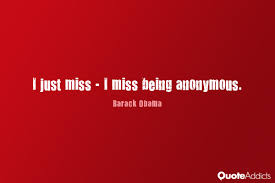 Yet there is a certain freedom in being anonymous. You can become whoever you want to be. They don't know who you are – or aren't.

Aspen is an interesting blend of humanity. Yes, it's a residence of choice for a lot of the rich and famous. The non-anonymous. But what makes it interesting is how difficult it is to tell the "average Joe" from the famous one. And I think that might be one of the reasons they like it here. The opportunity to fit in and not necessarily stand out. To be anonymous.

So when I walk down the street – or up a mountain – on my own, I am not just a "nobody." I could also be a "somebody." I could be a wildly successful author or screenwriter or businessperson or just about anything.

I'll end with a relevant (and favorite) song by Carly Simon:

And a little Staple Singers…