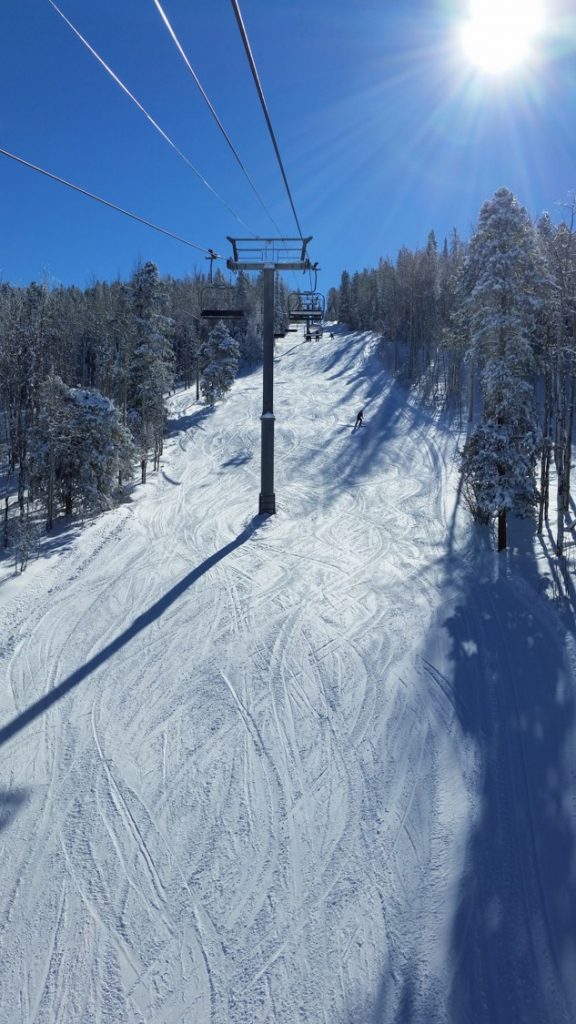 I confess: I've been cautious to take photos from the chair lift; afraid I'd drop the phone into the snow below. Even though it's on a cord around my neck. I've also demonstrated my paranoia (or is it just cautious prevention?) by attaching my gloves to my jacket and having a retainer for my sunglasses. (To be fair, I've already lost two pairs of sunglasses in the last two months, so…)

You can laugh. I'm laughing at myself.

As I rode the lift up, I chatted with a fellow skier, a man visiting from Texas, who asked me about the lack of people on the slopes yesterday. This was on Friday, January 6.

My response? A few reasons. First, I explained, it was a lot busier the week before (the week between Christmas and New Year's). The lift lines were a lot longer. Oh, horrors! We had to wait as long as ten minutes – 10 minutes! – to get on the lift. (That was sarcasm, if you didn't guess). And even at the busiest time of the year, with the exception of quite a few more group ski classes than usual, the slopes still weren't that crowded.

Why? Part of it could have to do with the fact that I was skiing Buttermilk, the easiest of the four mountains. But I think (and from what I've heard) the biggest reason is the impact in the improvement in technology. The lifts are apparently significantly faster than they used to be. So, not only does it reduce the time waiting in lift lines (which used to be as much as 30-45 minutes in peak season) to less than 10 minutes, it also (obviously) moves you up the mountain more quickly, which translates to the opportunity to get in a lot more runs in a lot shorter time period. Great! And what does that lead to? For most people, it means that you can get a whole day's skiing completed in a fraction of the time. As a friend said, in two hours, you can get as much skiing in as you used to get in a whole day.

No wonder I've had some days of exhaustion after only 2 hours of skiing! (Makes me feel better). It also means I can be more productive and get a full days' writing or work done and still go skiing, even when I take into account the time it takes to get my ski garb on and walk to the bus and get to the slopes. (Of course, if I skied Ajax, I wouldn't need the bus time back and forth).

I love it. Yet there is a downside that I wonder if they'd considered when they sped up the lifts. Apres ski isn't the same. It used to be that pretty much everyone would ski all day and then relax and have fun at the end of the ski day. Now, people can ski for a couple of hours anytime throughout the day, which means they could ski in the morning, in the mid-day, or at the end of the day, and still do a lot more the rest of the day.

Interesting, isn't it, how the repercussions to a single decision – a single improvement in technology – can have such a ripple effect?