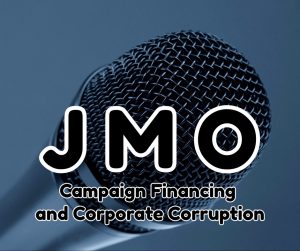 Here it goes. The shocker.

I used to be a Young Republican.

Yes, you read that right.

Let me explain and defend myself – and explain why I changed.

Actually, it isn't that I changed that much. It's the party that changed. Or, to be clearer – that got corrupt.

The basic "model" for the Republican party that I agreed with (at the time – over 30 years ago) was that it was better to spend money to support business than it was to support welfare. Said another way, I believed (and still believe) that it's better to create jobs than it is to pay people not to work. (More on jobs and job creation in a future blog).

That was before "greed is good" became the mantra of big business and corruption became so pervasive. In fact, I assert that the biggest problem with our society is how much we've allowed money – especially corporate and special interest money – to corrupt our politicians, and our politicians to use that money to destroy our planet. 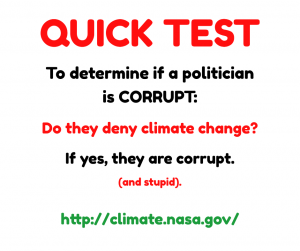 The most blatant example? The denial of climate change. Whenever ANY politician denies the TRUTH of climate change being caused by people, primarily by the use of fossil fuels – they are waving a flag declaring themselves corrupt – and have been bought off by the oil companies.

How can I be so sure?

The evidence is irrefutable – by scientists. Like people who have double PhD's in People who know a LOT more than politicians who have a financial interest in perpetuating the lies told by the oil companies.

Nearly as blatant is when Mike Pence took $100k or more from tobacco companies and declared, "Cigarettes don't kill." Did he really expect anyone to believe that?

Sadly, either they did believe his lies – or they didn't care that he was corrupt. I'm not sure which is worse.

First of all – who in their right mind would believe a politician over SCIENTISTS anyway? Especially a politician who gets money from oil or tobacco companies? For the unbiased truth, check out https://climate.nasa.gov/ – or even the Weather Channel.

And then we have politiicans who are so financed (paid off) by oil companies that they won't support (and often even condemn) what's best for the planet – like renewable, clean energy like solar and wind and other renewable sources. And those who use their big-money influence to ILLEGALLY attack the peaceful protestors at Standing Rock so they can have their soil-contaminating pipelines.

The responsibility of the government is to the PEOPLE – not to special interests.

And maybe it wouldn't be so horrible if it wasn't so HORRIBLE. Like destroy-the-planet horrible. Kill people with cigarettes horrible. Pollute the air horrible. Cause irreversible, devastating planet changes. Watch the video below if you have ANY questions.

Other examples of this corrupt violation include the NRA/gun manufacturers and Defense contractors – and the politicians who defend the rights of mentally ill people to get guns and ammunition. (Sorry, but that's not the language in the Second Amendment – which allows for a "well-regulated militia" – violence in our theaters and schools and streets and other public places.

And now we have a president who colluded with Russia to illegally "win" the election so he can get his tiny, greedy hands on that $500 billion oil deal with Russia/Putin. Does he care if this alliance with an evil dictator results in a war? Of course. Because he's undoubtedly invested in defense contractors, and can't wait to follow in Cheney and Bush's footsteps and make $39 off a war. Why else (a) not share his tax returns and investments, (b) say that a president "can't have conflicts of interest" and (c) hire Cheney as an adviser?

So, what's the solution?

First of all, end Citizens United. Not allow politicians to profit from these kinds of destructive alliances.

And secondly, manage corporate corruption in other ways. See my future post on Jobs.